Romania offers plenty of options for holiday-makers, including both inland snow and coastal Black Sea resorts, as well as culture, historical medieval buildings, and national parks.

A Good Financial Time to Go √

Current exchange rates between the Australian dollar and the Romanian new leu make Romania a good value for money destination for Australian tourists.

As the graph below shows, the Australian dollar (AUD) will currently buy you approximately 3 Romanian new leus (RON). Although you would have been able to get more than 3.5 new leus to the dollar 3 or 4 years ago, the Australian dollar has held up better against the new leu in recent years than against currencies like the United States dollar (USD). 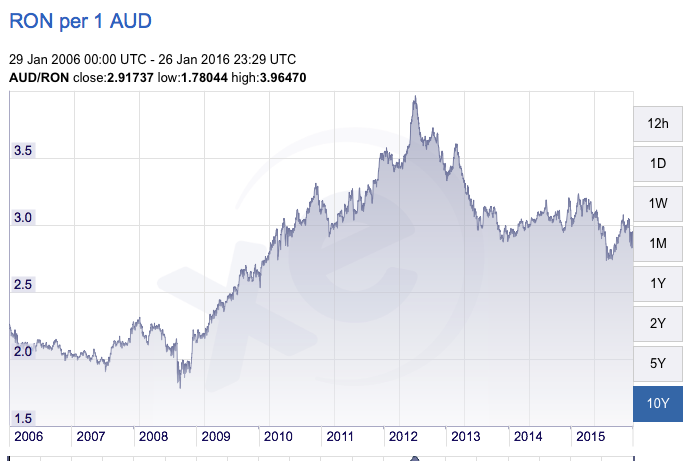 A Variety of Interesting Things to See and Do √

Before we get into those, you need to get your head around the geographic layout of the country. Romania is located in south-east Europe. Its capital city is Bucharest, and the country is bordered by the Black Sea, Bulgaria, Serbia, Hungary, the Ukraine, and Moldova.

Romanian is the official language in the country, but English is a subject offered in Romanian schools. About a third of the population speaks at least some English. 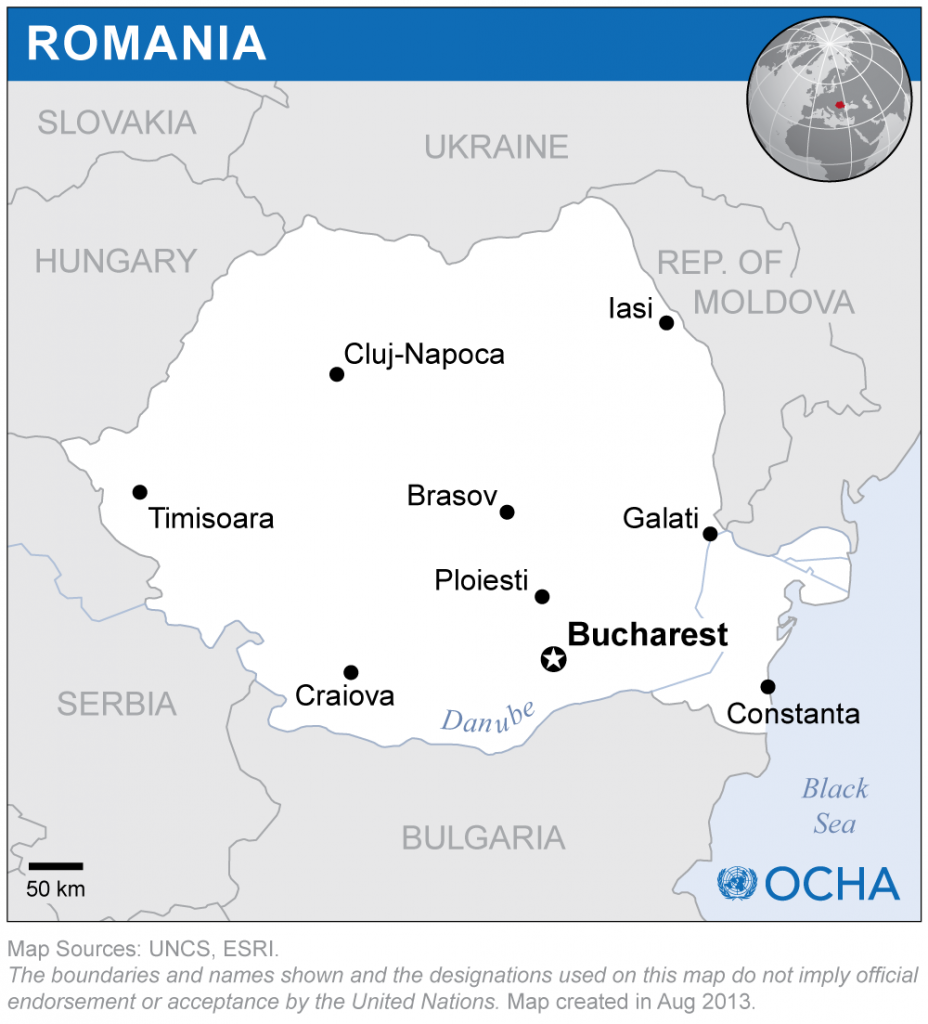 The Palace of the Parliament in central Bucharest is the second largest building in the world, with 365,000m2 of floor space spread across its 12 stories. It is where the Parliament of Romania convenes. More than 700 architects and up to 100 000 workers were involved in its construction. Guided tours of the Palace’s opulent interior take place throughout the day and it is well worth a visit. 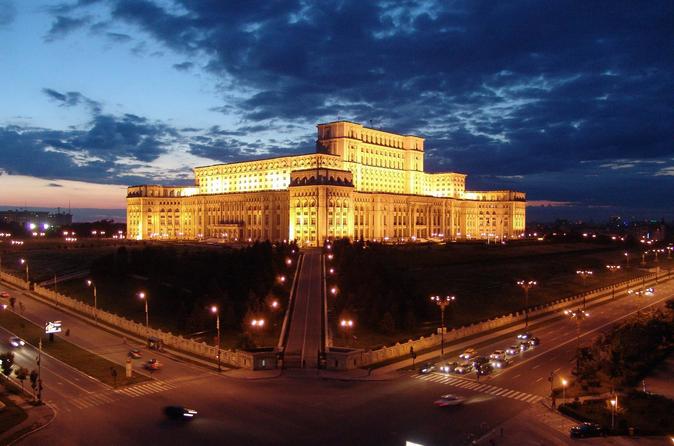 The Danube Delta is a World Heritage listed river that runs through the southern part of Romania. Day trips to explore its passages, scenery, and wildlife are popular. Over 300 bird species are known to inhabit the surrounding regions of the Danube in spring and summer each year (March to August). 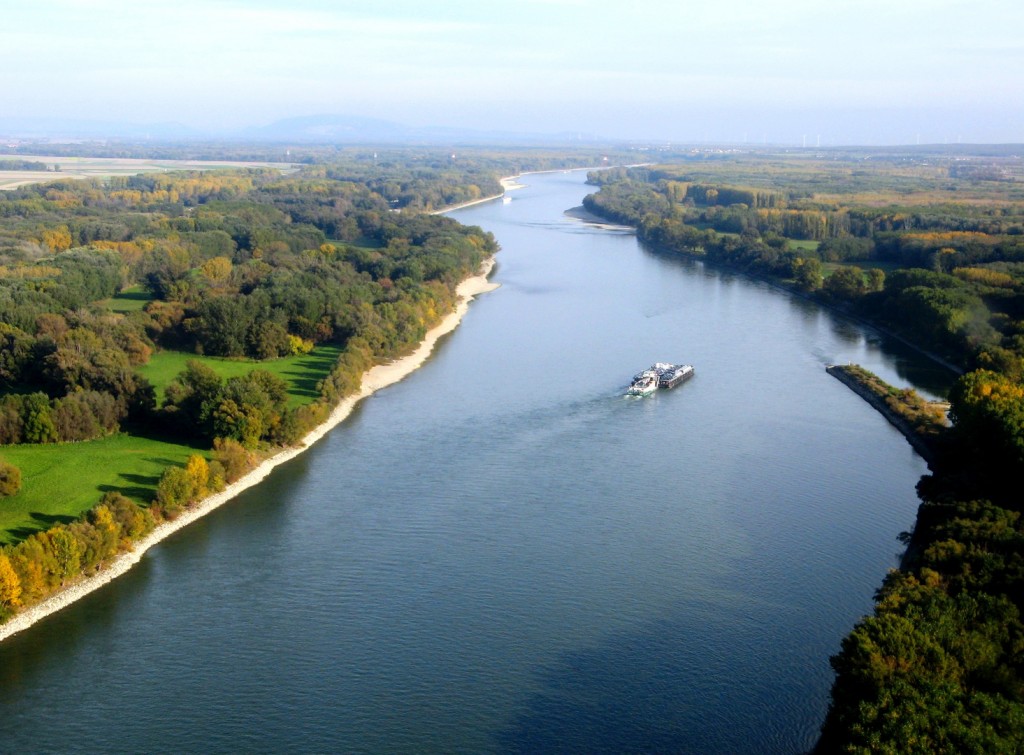 The 275-kilometre white sandy coastline of the Black Sea off south-eastern Romania features numerous resorts that are popular with beachgoers in summer (June – August). The Mamaia resort in Constanta is the most well known. In addition to 4 and 5-star accommodation options, campsites are also available. 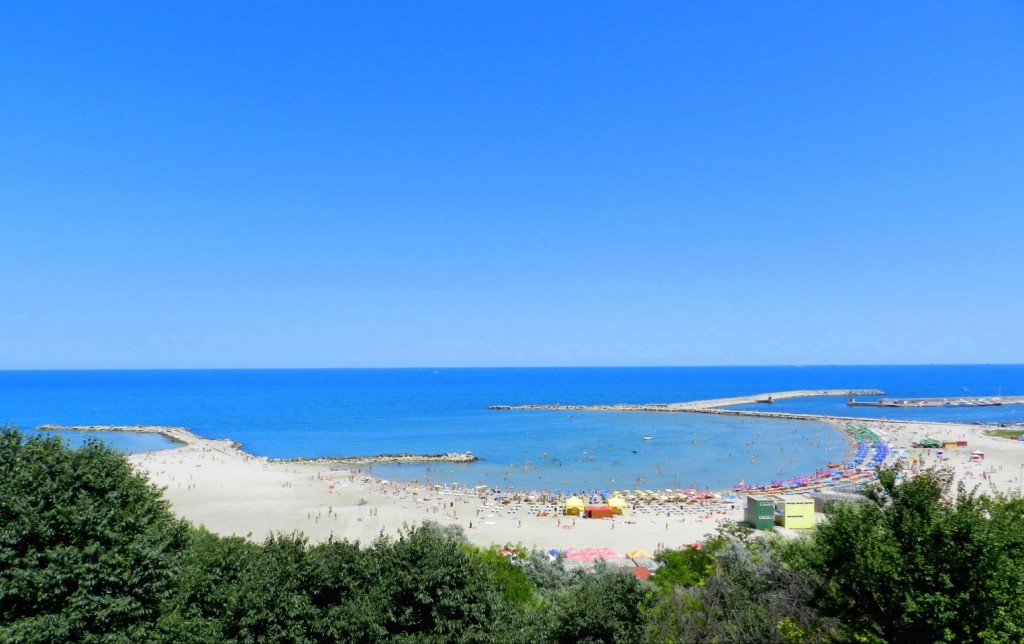 Romania’s winters and its Carpathian Mountains provide ideal skiing conditions at any number of inland resorts. The Poiana Brasov resort in the central Romanian city of Brasov is the most popular. Its numerous slopes cater for all standards, from beginner through to advanced. 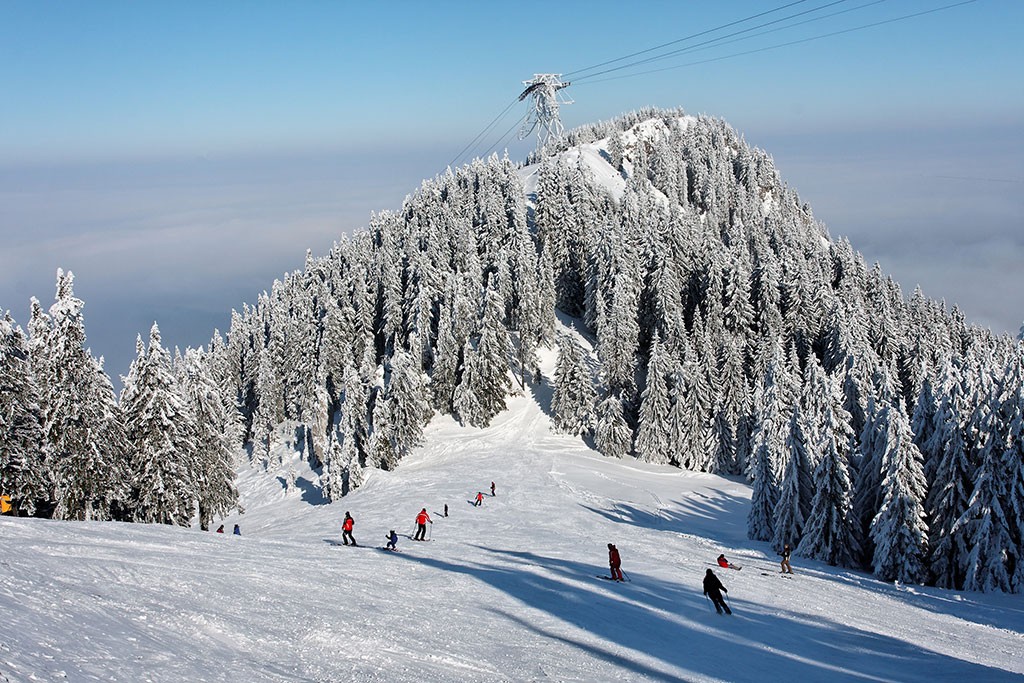 The Carpathian Mountains spread for 1500 kilometres across central Europe, with more than half of the range located in Romania. In addition to the range providing great skiing conditions in winter, numerous National Parks are situated in its surrounding areas. You’ll find pristine forests as well as a wide variety of unique flora and fauna. 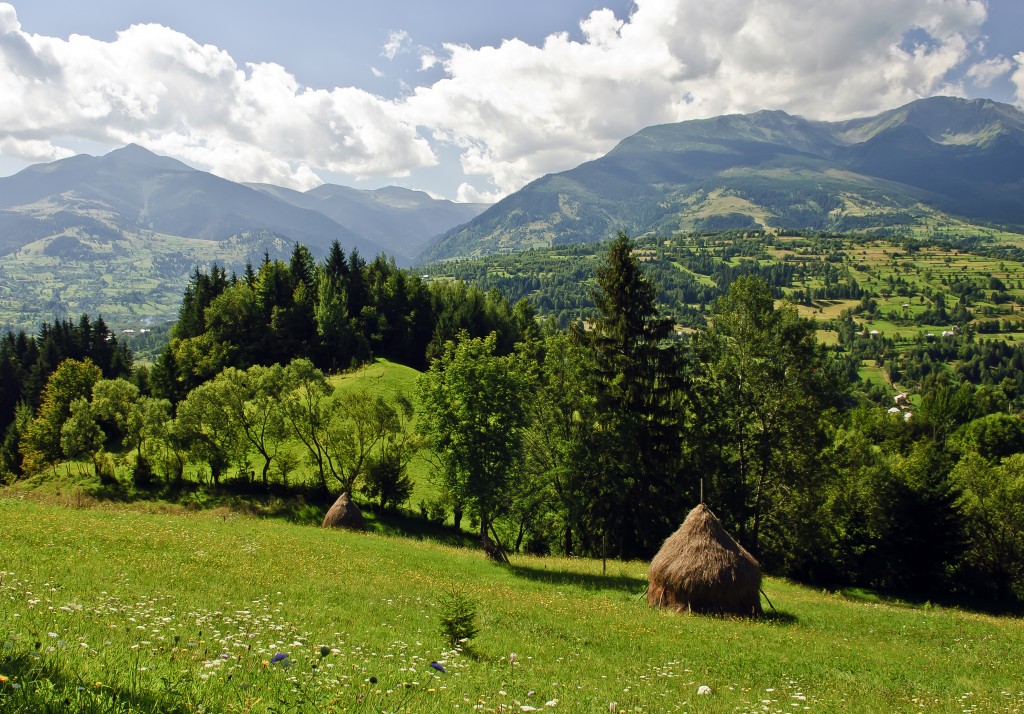 Also known as Dracula’s Castle, Bran Castle near Brasov was built in the 14th century as a Romanian fortress. It is now a museum open to tourists. In addition to the historical features of its design, Bran Castle’s interior contains art and furniture from the period. The region where the Castle is located is Transylvania, an area which inspired author Bram Stoker to make it the home of the fictional title character in his 19th century Dracula novel. 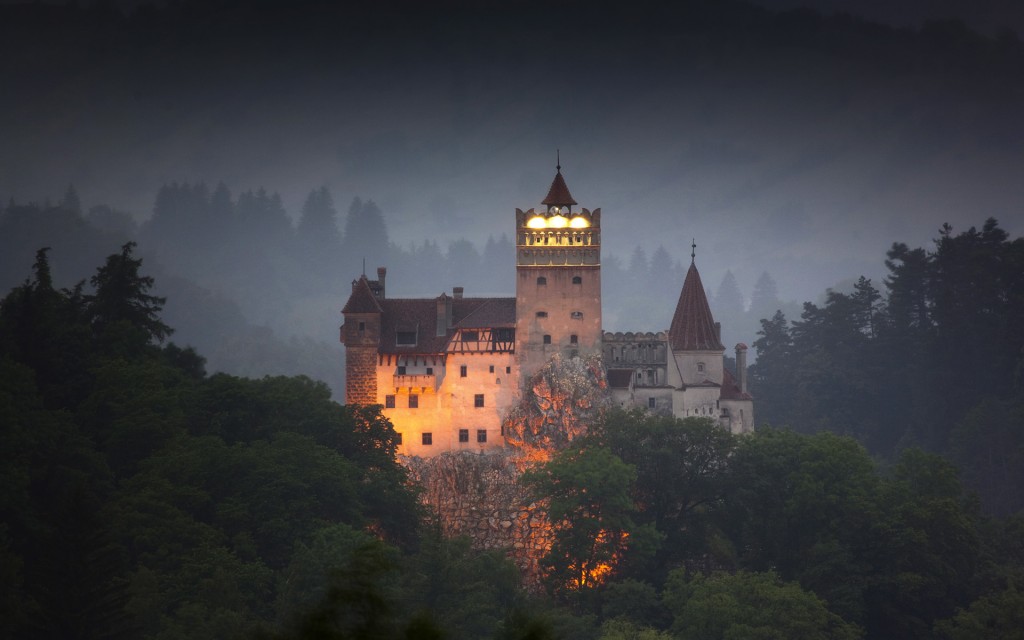 Built in the early 20th century, the Palace of Culture in Iasi in north-east Romania is a striking example of neo-Gothic architecture. It features 4 themed museums – science and technology, ethnography (culture), art and history. 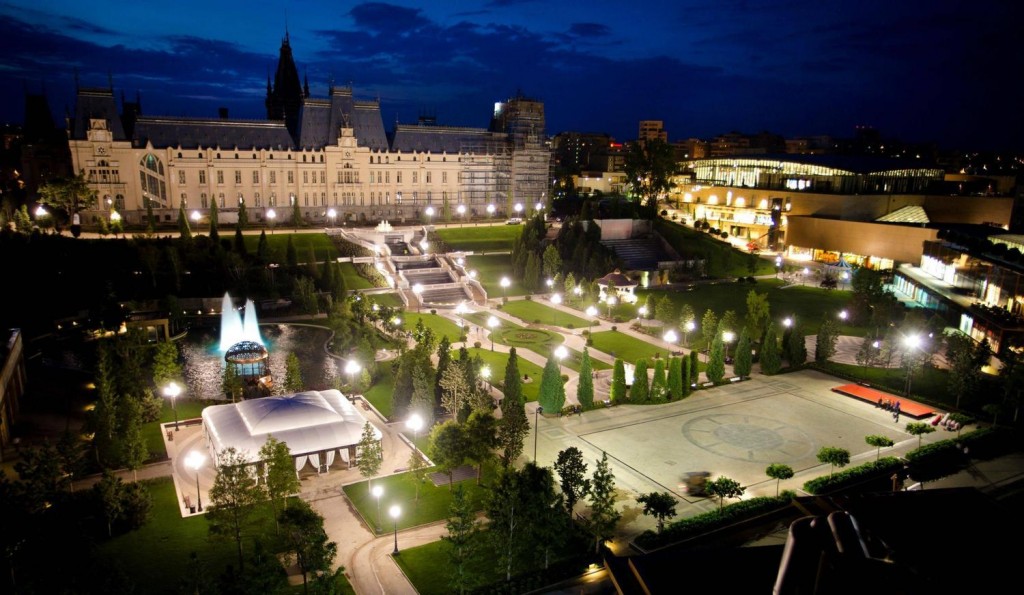 Romania and Bucharest, in particular, has a flourishing nightlife scene with restaurants, cafes, bars, and clubs very popular among locals and tourists alike. The ‘Old City’ in the capital has been redeveloped into a thriving cafe and bar scene and a fantastic way to spend a balmy summers evening. 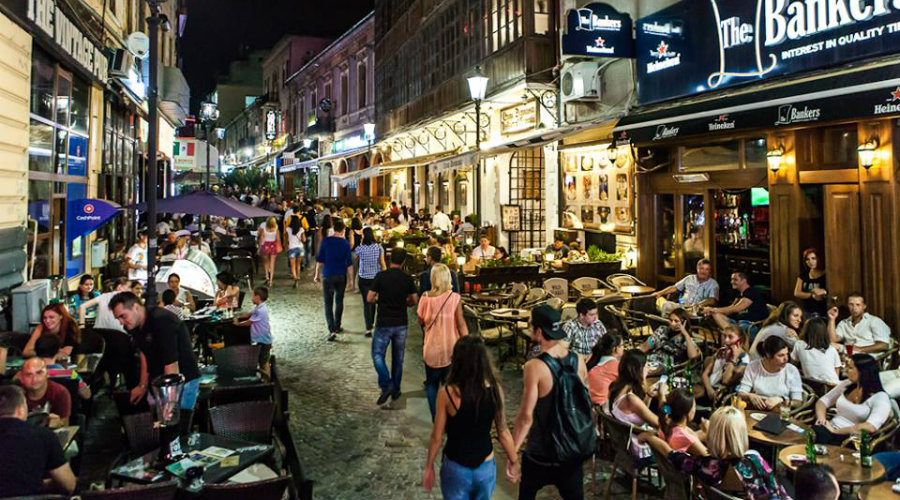 A Good Time of Year to Go √

Being located in the northern hemisphere, Romania’s seasons occur at the opposite time to Australia’s. Its winters are much cooler than Australia’s, with average temperatures of -5°C. Its summers are moderate, with a typical day being 29°C.

As with any destination, you can expect tourist attractions and accommodation within Romania to be more crowded and expensive during school holiday times. Romanian school holiday dates are as follows:

Summer:   Mid June to the beginning of September

Autumn:    Beginning of November to mid-November

Christmas: Approx 19 December to the start of January

There are regular flights to Bucharest (the capital and largest city in Romania) from most capital cities in Australia. It’s a long flight, taking approximately 22 hours from the east coast of Australia. However, there are very few direct flights. You are likely to have at least one but probably two stopover destinations along the way (in Asia, the Middle East and/or Europe). Connecting flights are common for such a long journey. Your total travel time will obviously be affected by the length of any stopovers, so you should plan accordingly.

Within Romania, there are airports in each of its major cities. Flights between cities are relatively short by Australian standards. For example, a flight between Bucharest in the south-east of the country and Iasi in the north-east only takes just over an hour. It also has a vast train network allowing travel between Bucharest and all major tourist hot spots.

The Australian government’s official advice from the Department of Foreign Affairs and Trade is that Australians should exercise normal safety precautions when travelling in Romania. As you should in any international country, pay close attention to your personal security and belongings.

You should also talk to your doctor about appropriate vaccines and preventative medicines before you go. In addition to the routine vaccines, for Romania, you should prevent your chances of contracting any of the following diseases – hepatitis A/B and rabies.

Please Share your travel Romania tips, tricks and stories in the comments section so that others can benefit on their journey!